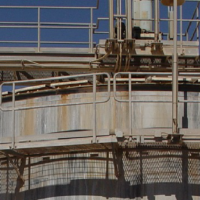 When the owners of the facility decided to decommission their zinc die cast facility in Marysville, Ohio, they needed to partner with an waste/industrial contractor able to safely and effectively manage the complexities of decommissioning a turn-of-the-century era facility impacted by 100+ years of residual cyanide and heavy metal contamination.

The following waste quantities were generated throughout the process and transported off-site for waste treatment and disposal: