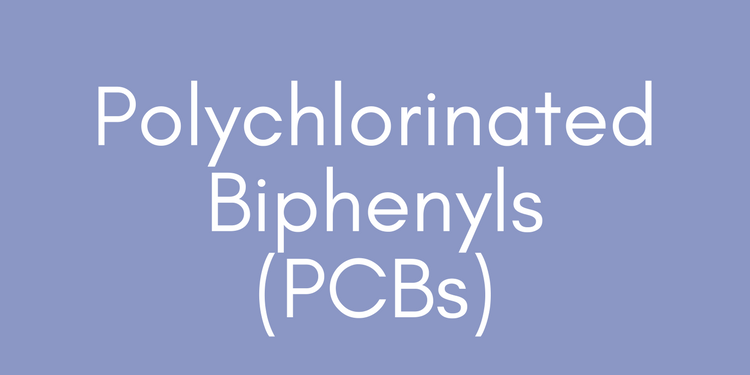 PCBs are a group of man-made organic chemicals consisting of carbon, hydrogen and chlorine atoms. The number of chlorine atoms and their location in a PCB molecule determine many of its physical and chemical properties. PCBs have no known taste or smell, and range in consistency from an oil to a waxy solid.

PCBs belong to a broad family of man-made organic chemicals known as chlorinated hydrocarbons. PCBs were domestically manufactured from 1929 until manufacturing was banned in 1979. They have a range of toxicity and vary in consistency from thin, light-colored liquids to yellow or black waxy solids. Due to their non-flammability, chemical stability, high boiling point and electrical insulating properties, PCBs were used in hundreds of industrial and commercial applications including:

Although no longer commercially produced in the United States, PCBs may be present in products and materials produced before the 1979 PCB ban. Products that may contain PCBs include:

The PCBs used in these products were chemical mixtures made up of a variety of individual chlorinated biphenyl components known as congeners. Most commercial PCB mixtures are known in the United States by their industrial trade names, the most common being Arochlor.

Release and Exposure of PCBs

Today, PCBs can still be released into the environment from:

PCBs do not readily break down once in the environment. They can remain for long periods cycling between air, water and soil. PCBs can be carried long distances and have been found in snow and sea water in areas far from where they were released into the environment. As a consequence, they are found all over the world. In general, the lighter the form of PCB, the further it can be transported from the source of contamination.

PCBs can accumulate in the leaves and above-ground parts of plants and food crops. They are also taken up into the bodies of small organisms and fish. As a result, people who ingest fish may be exposed to PCBs that have bio accumulated in the fish they are ingesting.

The National Center for Health Statistics, a division of the Centers for Disease Control and Prevention, conducts the National Health and Nutrition Examination Surveys (NHANES). NHANES is a series of U.S. national surveys on the health and nutrition status of the noninstitutionalized civilian population, which includes data collection on selected chemicals. Interviews and physical examinations are conducted with approximately 10,000 people in each two-year survey cycle. PCBs are one of the chemicals where data are available from the NHANES surveys.

A PCB congener is any single, unique well-defined chemical compound in the PCB category. The name of a congener specifies the total number of chlorine substituents, and the position of each chlorine. For example: 4,4′-Dichlorobiphenyl is a congener comprising the biphenyl structure with two chlorine substituents – one on each of the #4 carbons of the two rings. In 1980, a numbering system was developed which assigned a sequential number to each of the 209 PCB congeners.

With few exceptions, PCBs were manufactured as a mixture of individual PCB congeners. These mixtures were created by adding progressively more chlorine to batches of biphenyl until a certain target percentage of chlorine by weight was achieved. Commercial mixtures with higher percentages of chlorine contained higher proportions of the more heavily chlorinated congeners, but all congeners could be expected to be present at some level in all mixtures. While PCBs were manufactured and sold under many names, the most common was the Aroclor series.

Aroclor is a PCB mixture produced from approximately 1930 to 1979. It is one of the most commonly known trade names for PCB mixtures. There are many types of Aroclors and each has a distinguishing suffix number that indicates the degree of chlorination. The numbering standard for the different Aroclors is as follows:

PCBs were manufactured and sold under many different names. The names in the following table have been used to refer to PCBs or to products containing PCBs. Please note:

In addition, the Government Printing Office maintains a searchable database of all CFR publications and Federal Register (FR) Notices.

The Toxic Substances Control Act of 1976 provides EPA with authority to require reporting, record-keeping and testing requirements, and restrictions relating to chemical substances and/or mixtures, including PCBs. Some substances are generally excluded from TSCA, including but not limited to, food, drugs, cosmetics and pesticides. TSCA addresses the production, importation, use and disposal of specific chemicals including polychlorinated biphenyls (PCBs), asbestos, radon and lead-based paint. For more information see EPAs Summary of the Toxic Substance Control Act page.

PCB Regulations: Part 761 in Title 40 of the Code of Federal Regulations

Current PCB regulations, published pursuant to the TSCA statute, can be found in Title 40 of the Code of Federal Regulations (CFR) in Part 761. The Government Printing Office maintains the most current version of the CFR. View PCB regulations in the electronic-CFR. For useful interpretation of the regulations as well as answers to frequently asked questions please visit EPA’s Policy and Guidance for PCBs page.

Detailed List of PCB Federal Register Notices (As of September 6, 2012)

EPA publishes information about the PCB program through the Federal Register. The Federal Register Notices listed below include PCB-related rules (proposed and final), notices of public meetings, responses to official comments, etc. This is not a comprehensive list of current regulations. A searchable listing of EPA’s Register Notices can be found on the Federal Digital System web page.

PCBs are not defined as hazardous wastes (Memo, Weddle to Verde; May 18, 1984 – RCRA Online Number 12235).  However, it is possible that PCBs may be incidental contaminants in listed hazardous waste (e.g., solvent used to remove PCBs from transformers) or may be present in wastes that are characteristically hazardous. In these cases, wastes that otherwise meet a listing criteria or are characteristically hazardous are still subject to RCRA regulation regardless of PCB content.

However, to avoid duplicative regulation with Toxic Substances Control Act (TSCA), certain PCB containing wastes that exhibit the toxicity characteristic are exempt from regulation under RCRA (Monthly Call Center Report Question; September 1996 – RCRA Online Number 14014). Section 261.8 exempts from RCRA Subtitle C regulation PCB-containing dielectric fluid and the electric equipment which holds such fluid if they satisfy two criteria. First, these PCB wastes must be regulated under the TSCA standards of Part 761. Second, only the PCB wastes which exhibit the toxicity characteristic for an organic constituent (waste codes D018-43) may qualify for the exemption (§261.8).

States may also have a regulatory program which is more stringent or broader in scope than the Federal program.  Many state have expanded their universe of regulated wastes to cover additional waste (e.g., PCBs) not defined as hazardous under the Federal program.  Individuals should check with their state to see if they are subject to any state requirements.

Additional information regarding the regulation of PCBs under RCRA is available in the following guidance documents:

The docket for this rulemaking is EPA-HQ-RCRA-2011-0524 and can be accessed at Regulations.gov.

The comment period closed November 5, 2012. No adverse comments on the rule were received, so the direct final rule took effect December 5, 2012.

EPA issued this direct final rule to update and clarify several sections of the PCB regulations associated with manifesting requirements. This update streamlined regulations for the safe management of PCBs making it easier for industry to understand and follow PCB manifest regulations. Specifically, this update matches the manifesting requirements for PCBs under the TSCA to those of RCRA to the greatest extent possible.

Hazardous Waste Management in the Laboratory
May 2, 2022

Protect the environment when you recycle your used motor oil and other materials for free — locally
March 9, 2022

How to Safely Dispose of Used Antifreeze
March 7, 2022
Application Form
Go to Top