HOW BAD ARE PLASTICS, REALLY? 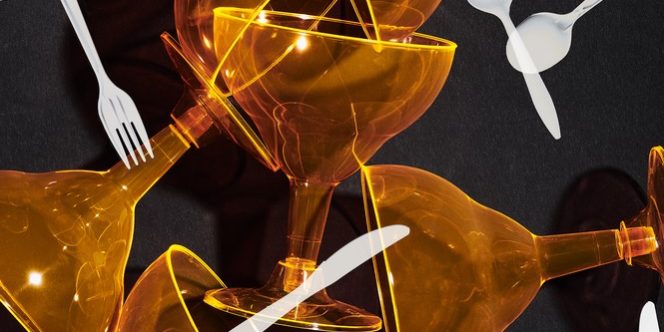 This is hardly the time to talk about plastics is what I think when Dad, hovering over the waste bin at a post-funeral potluck, waves me over, his gesture discreet but emphatic. He has retrieved from the trash a crystalline plastic cup, with fluted, rigid sides. “Polystyrene,” he grins, inverting the cup to reveal its resin code (a 6 stamped inside the recycling symbol). “But not my kind.”

Dad, back in the 1960s, had manufactured a more resilient variety of polystyrene for Union Carbide, one of the 20th century’s major plastics manufacturers, since acquired by Dow Chemical Company. Now, in the parish hall, I recognize he is seconds from crushing the cup. As if on cue, he closes his grip. Being a certain type of polystyrene—and this is his point—the cup splinters into a strange bloom of shards arrayed about the cup’s circular bottom.

No butadiene, I think. “No butadiene,” he says, which, on the production lines he ran, had been added to rubberize the resin, one among 10,000 helpmates that make plastics as we know them possible. Dad shuffles off to find the recycling bin, though he knows the cup has little chance for recovery and likely a long afterlife ahead. This is especially true for polystyrenes, of which there are multiple varieties; plastics, as the anthropologist Tridibesh Dey notes, are a chemically complex lot, designed for performance rather than reclamation.

Dad once believed that plastics could be reused indefinitely. I imagine that, maybe, he thought plastics, like their makers, deserved the chance to begin again. When Union Carbide downsized in the 1970s, Dad took severance and stayed home with my siblings until he could figure out what a life beyond plastics might look like. The answer, it turned out, was public administration: For a time, he ran my hometown’s recycling program. Recycling, though, never lived up to Dad’s ideal. Of all the plastics made over his lifetime, less than 10 percent has been effectively repurposed.

How Can We Solve The Growing E-Waste Problem?
January 9, 2023

The Changing Face of Waste Management in the COVID Era
December 14, 2022

How Much Do We Waste? A Data-Driven Guide to Waste and Landfills
December 12, 2022
Application Form
Recent posts
Our Services
Contact Us
Go to Top